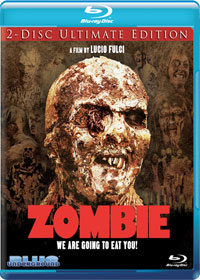 Blue Underground is preparing a few very cool releases for fans of Italian cult director Lucia Fulci, bringing The House by the Cemetery and Zombie to Blu-Ray this fall.

In The House by the Cemetery, a young family moves from their cramped New York City apartment to a spacious new home in New England. But this is no ordinary house in the country: the previous owner was the deranged Dr. Freudstein, whose monstrous human experiments have left a legacy of bloody mayhem. Now, someone – or something – is alive in the basement, and home sweet home is about to become a horrific hell on earth.

Fulci’s masterpiece Zombie will arrive as a 2-disc set on Blu-Ray Disc. In Italy, it was considered the “unofficial sequel” to DAWN OF THE DEAD. In England, it was known as ZOMBIE FLESH EATERS and banned as obscene. In America, it was called ZOMBIE and advertised with the depraved tag line “WE ARE GOING TO EAT YOU!” Tisa Farrow (THE GRIM REAPER), Ian McCulloch (CONTAMINATION), Al Cliver (CANNIBALS), and Richard Johnson (THE HAUNTING) star in this worldwide splatter sensation directed by “Maestro Of Gore” Lucio Fulci that remains one of the most eye-skewering, skin-ripping, gore-gushingly graphic horror hits of all time!

Also part of the release is ”Zombie Lover” in which award-winning Filmmaker Guillermo del Toro talks about one of his favorite films. The release is rounded out by Theatrical Trailers, TV Spots and Radio Spots as well as a Poster & Still Gallery.