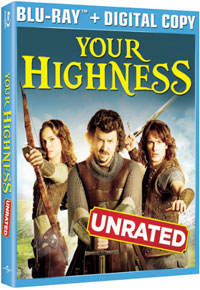 Universal Home Entertainment has included Your Highness in their release line-up, bringing the comedy to DVD and Blu-Ray Disc in August.

Get high and mighty with Danny McBride, James Franco and Natalie Portman in Your Highness, the epic and hilarious action-comedy from the director of Pineapple Express. Two royal princes—slacker Thadeous (McBride) and the noble Fabious (Franco)—join with an elusive warrior (Portman) on a quest to free a princess from an evil wizard. Along the way, they’ll have to vanquish horrific creatures and traitorous knights in this raunchy trip loaded with footage too outrageous for theaters.

The DVD version will feature the theatrical and an unrated version of the film, complete with Alternate Scenes, a Gag Reel, the Featurette Damn You Gods” and a Feature Commentary with Video Intro by Director Gordon Green, Executive Producer/Co-Writer/Star Danny McBride and Stars James Franco & Justin Theroux.

On Blu-Ray Disc, you will get to witness the theatrical and an unrated version of the film also, in 1080p high definition with DTS 5.1 HD Master Audio. The disc will include the same bonus materials as the DVD, but will further add Line-O-Rama, Perverted Visions and A Vision of Leezar to the mix, along with My Scenes and pocket BLU features and a Digital Copy.