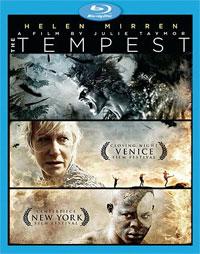 Buena Vista Home Entertainment has just added Julie Taymor’s The Tempest to their line-up, bringing the film to DVD and Blu-Ray Disc in September.

This modern retelling of William Shakespeare’s final masterpiece is an exciting, mystical and magical fantasy with Academy Award®-winner Helen Mirren (Best Actress, The Queen, 2006) leading a star-studded cast including Russell Brand (Get Him To The Greek) and Alfred Molina (The Sorcerer’s Apprentice). Exiled to a magical island, the sorceress Prospera (Helen Mirren) conjures up a storm that shipwrecks her enemies, and then unleashes her powers for revenge. Directed by Julie Taymor — and complete with exclusive bonus features — The Tempest, with its innovative twist, is a supernatural dramedy filled with Shakespearean villains, lovers and fools that will leave you spellbound.

The release will feature an Audio Commentary with Director Julie Taymor. Also included is a Russell Brand Rehearsal Riff and the Music Video “O Mistress mine” by Reeve Carney.