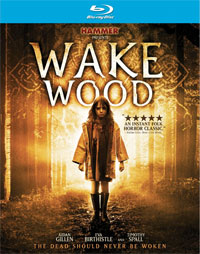 MPI Media has announced the release of the new Hammer Horror film Wake Wood, scheduling the movie on DVD and Blu-Ray Disc for July.

“Wake Wood” tells the story of Patrick and Louise Daley (Aiden Gillen and Eva Birthistle), whose 9-year-old daughter, Alice (Ella Connolly), is killed in a horrific dog attack. To escape their grief, the devastated young parents move to the remote rural Irish community of Wake Wood (the movie was shot on location in County Donegal, Ireland). Sensing Patrick and Louise’s loss, the strange people of Wake Wood introduce the couple to a bizarre pagan ritual that will bring Alice back from the grave – for three days only. The Daleys find the idea disturbing and exciting in equal measure, but once they agree to terms with Arthur, the village’s mysterious leader, a far bigger question looms: What will they do when it’s time for Alice to leave them forever?

The supernatural shocker “Wake Wood” will arrive on July 5 for $27.95 on DVD and $34.98 on Blu-Ray Disc. No bonus materials have been announced at this time.