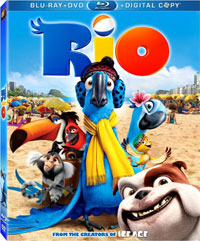 The animated movie Rio will arrive on DVD and Blu-Ray Disc soon, as 20th Century Fox Home Entertainment has scheduled the release of the family comedy for August.

Captured as a young bird from the wild, Blu (Jesse Eisenberg) is a domesticated Spix Macaw living thousands of miles away from his homeland, Brazil. When his human owner Linda (Leslie Mann) discovers that he is the last male of his kind, they head south to Rio de Janeiro to meet the only other female. But it’s far from love at first sight between the socially-awkward, flight-challenged Blu and the fiercely independent, high-flying female, Jewel (Anne Hathaway). Shortly after Blu’s arrival, the two rare birds are captured by greedy animal smugglers and find themselves lost in the Brazilian rainforest. Unexpectedly thrown together, they embark on a hilarious and clumsy adventure where they learn about friendship, love, courage and spreading one’s wings to fly.

The DVD version will feature an anamorphic widescreen transfer of the movie with a Dolby Digital 5.1 audio track. Among the bonus materials on the release you will find Explore the World of Rio, Blu Shows the Way (Introduction) as well as Boom-Boom Tish Tish: The Sounds of Rio. Also included are the Featurettes ”The Making of Hot Wings,” “Saving the Species: One Voice at a Time,” and “The Real Rio”. The Music Video ”Welcome to Rio” will also be part of the disc, along with the Deleted Scene “Fruit Stand”. Carnival Dance O Rama is another extra, featuring an Intro, Blu, Jewel, Luiz, the Monkeys, Nico and Pedro, Raphael and the Samba Line. Also look for the Rio de JAM-eiro Jukebox, the Taio Cruz – Telling the World Music Video as well as a number of “Rio”-related extras for the Angry Birds game.

The Blu-Ray version will feature a 1080p high definition transfer, supplemented by a DTS 5.1 HD Master Audio track. It will include the same bonus materials as the DVD version. In addition, it will also contain the DVD version and a Digital Copy of the movie.