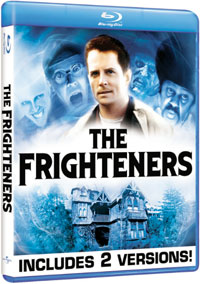 In the sleepy town of Fairwater, a monstrous evil has awakened… an evil so powerful, its reach extends beyond the grave.

For Frank Bannister (Michael J. Fox), death is a great way to make a living: ridding haunted houses of their unwelcome “guests.” But he’s in cahoots with the very ghosts he promises to evict! It’s the perfect scam… until Frank finds himself at the center of a dark mystery. A diabolical spirit is on a murderous rampage, and the whole town believes Frank is behind it.

The release will contain two versions of the film, the Theatrical Cut as well as an extended Director’s Cut, both in 1080p high definition with DTS 5.1 HD MAster Audio.

As extras, the disc will include The Making of The Frighteners and Storyboarding along with Universal’s My Scenes and Pocket BLU features.

The Director’s Cut will also include Peter Jackson’s 10th Anniversary Introduction and feature a Commentary Track by Director Peter Jackson.