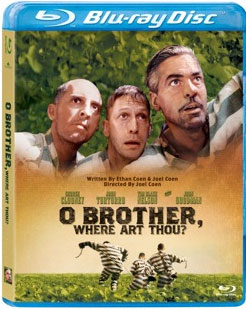 Buena Vista Home Entertainment has just added the Coen Brothers’ O Brother, Where Art Thou? to their line-up, scheduling the film for release on Blu-Ray Disc in September.

George Clooney and John Turturro embark on the adventure of a lifetime in this hilarious, offbeat road picture.

Fed up with crushing rocks on a prison farm in Mississippi, the dapper, silver-tongued Ulysses Everett McGill (Clooney) busts loose…except that he’s still shackled to two misfits from his chain gang: bad tempered Pete (Turturro) and sweet, dimwitted Delmar (Tim Blake Nelsen) With nothing to lose and buried loot to regain, the three embark on a riotous odyssey filled with chases, close calls, near misses and betrayal.  Experience every unpredictable moment as it plays out in the crystal-clear sound and breathtaking picture quality of Blu-ray. Populated with strange characters,including a blind prophet, sexy sirens and a one-eyed Bible salesman (John Goodman), O Brother, Where Art Thou will leave you laughing at every outrageous and surprising twist and turn!

Presented in 108p high definition with a DTS 5.1 HD Master Audio track, the disc will also include an Exclusive Behind The Scenes Featurette, Two Storyboard to Scene Comparisons, as well as the “I Am A Man Of Constant Sorrow” Music Video and the movie’s Theatrical Trailer.

You better mark your calendar right now, because “O Brother, Where Art Though?” will arrive on Blu-Ray on September 13 for $26.50.