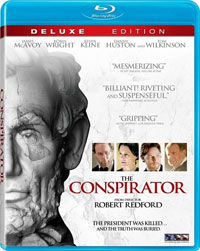 Lionsgate Home Entertainment has added The Conspirator to their release line-up, bringing the Robert Redford-directed movie to DVD and Blu-Ray Disc in August.

In the wake of the assassination of President Lincoln in 1865, a country mourns its leader, and eight people are charged with conspiring to kill the President, Vice President and Secretary of State.  The lone woman accused, Mary Surratt (Robin Wright), owns the boarding house where the attack was planned. Faced with a certain death, Surratt’s only hope comes in the form of a newly minted lawyer and Union war hero, Frederick Aiken (James McAvoy), who reluctantly agrees to defend Surratt before a military tribunal. As the courtroom trial unfolds, Aiken realizes his client may be innocent and that she is being used as bait in order to capture the only conspirator to have escaped a massive manhunt, her son (Johnny Simmons).

Arriving as a 2-disc DVD will include a wealth of bonus materials, including a feature-length Documentary about the plot to kill Lincoln, Interviews with the cast and crew plus numerous Featurettes that look at the making of the film and the true story it captures.

The Blu-Ray Disc with a high definition transfer of the film will contain all the bonus materials from the DVD but will also include a Video Commentary with Robert Redford instead of the audio commentary, and Image Galleries. “The Conspirator” is housed in collectible embossed, foil stamped packaging for a limited time.