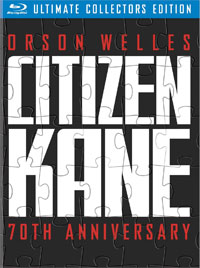 Restored from Original Nitrate Elements in 4K Resolution, Orson Welles’ masterpiece Citizen Kane is headed for Bly-Ray Disc this fall as an Ultimate Collector’s Edition, featuring not only the movie itself but also hours worth of bonus materials and additional films.

These newest 70th Anniversary editions will present the film in the highest quality yet. “The work to recreate the original look of the film and to clean up the effects of aging was a painstaking, frame-by-frame process. The source for most of the picture was a 4K scan from a 1941 composite fine grain positive master.” says Warner Bros. Motion Picture Imaging (MPI) colorist Janet Wilson.

Included in the release are Two Commentary Tracks, one by Orson Welles historian Peter Bogdanovich and the second by movie critic Roger Ebert.

The new edition includes feature-length stories-behind-the-story that include the Two-hour Academy Award-nominated Documentary ”Battle over Citizen Kane”, as well as ”RKO 281,” the Golden Globe® and Emmy ® winning HBO Docudrama that chronicles the clash between William Randolph Hearst and Hollywood.

“Citizen Kane” arrives as a 3-disc Blu-Ray version on September 13 for $64.99. If you hurry, you can place your pre-order on Amazon right now, where the release is on sale for only $44.99 as of this writing!