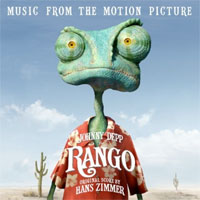 Paramount Home Entertainment has just unveiled details about the upcoming release of Rango on DVD and Blu-Ray Disc this summer.

The incomparable Johnny Depp voices Rango, a chameleon living as an ordinary family pet who dreams of being a fearless hero and is challenged to become just that when he inadvertently becomes the sheriff of a lawless desert town called Dirt.

The DVD version is presented in anamorphic widescreen with Dolby Digital 5.1 sound and will feature both, the Theatrical and Extended Version of the movie. Also included is a Commentary Track by director, story co-writer and producer Gore Verbinski, head of story James Ward Byrkit, production designer Mark “Crash” McCreery, animation director Hal Hickel and visual effects supervisor Tim Alexander on the Extended Version only.

Real Creatures of Dirt is a fun and educational piece, in which animal experts talk about the real creatures that inspired the characters of “Rango” and the filmmakers explain why they chose specific animals to reflect certain personality traits.

Deleted Scenes, including a never-before-seen Alternate Ending will round out th disc.

On Blu-Ray Disc, the film will be presented in 1080p high definition with DTS 5.1 HD Master Audio in both its Theatrical and Extended Version. Aside from all the bonus materials from the DVD version, this edition will also include the 2-part featurette Breaking The Rules: Making Animation History, discussing how Gore Verbinski and Industrial Light & Magic (ILM) prepared for their first animated movie by following every step the filmmakers made to create this new kind of animated film.

Also included here is Storyboard Reel Picture-In-Picture, allowing you to enhance your movie-viewing experience by watching the entire theatrical version of the movie with picture-in-picture images of the storyboards.

A Field Trip to Dirt is a featurette using the technology and footage from ILM’s special camera, to put viewers in control of their own tour of Dirt.  They can select the streets they want to explore and the characters they’d like to interact with, discovering trivia and other bonus footage along the way.

This release is rounded out by the movie’s Theatrical Trailer, the DVD version and a Digital Copy.