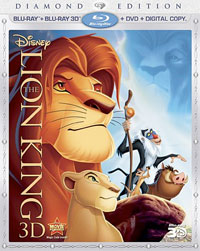 After 7 years of absence from home video formats, Walt Disney Home Entertainment is bringing The Lion King back into homes on DVD, Blu-Ray Disc and Blu-Ray 3D. To accompany the release in October, Disney will also bring the movie back to theaters for a limited 3D engagement.

An unforgettable story, breathtaking animation, beloved characters and award-winning music sets the stage for “The Lion King”, a Disney classic that follows the adventures of Simba, the feisty lion cub who “just can’t wait to be king.” But his envious Uncle Scar has plans for his own ascent to the throne, and he forces Simba’s exile from the kingdom. Alone and adrift, Simba soon joins the escapades of a hilarious meerkat named Timon and his warmhearted warthog pal, Pumbaa. Adopting their carefree lifestyle of “Hakuna Matata,” Simba ignores his real responsibilities until he realizes his destiny and returns to the Pride Lands to claim his place in the “Circle of Life.”

The release will arrive as a single-disc DVD, featuring the movie and the Featurette ”The Lion King: A Memoir-Don Hahn”.

The release will also be released as a 2-Disc Combo containing a DVD and a Blu-Ray version of the film, along with a Commentary Track, and a variety of Deleted and Extended Scenes, along with a Deleted Song. Also included are Never Before Seen Bloopers, the Featurettes ”Disney Second Screen,” “Pride of The Lion King” and “The Lion King: A Memoir-Don Hahn”. A Sing Along Mode and Interactive Blu-ray Galleries will round out the release.

Disney will also release a 4-disc Blu-Ray 3D Combo, containing the Blu-Ray 3D version of the film, the Blu-Ray version, the DVD and a Digital Copy. In terms of bonus materials, this release will contain the same extras as the Bl-Ray version.

Mark October 4 in your calendars, because that’s when this movie rolls out again.