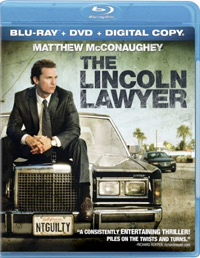 Lionsgate Home Entertainment is releasing The Lincoln Lawyer in July, bringing this Matthew McConaughey thriller to DVD and Blu-Ray Disc for the first time.

Having spent most of his career defending gutter-variety criminals, attorney Mick Haller (Matthew McConaughey) takes on a case that could land him a real office, instead of running his practice out of his old Lincoln.  Haller reaches a crisis of conscious, though, while working on the defense of Beverly Hills playboy Louis Roulet (Ryan Phillippe).  Roulet is charged with attempted murder and what appears to be a straightforward case with a big payoff escalates into a deadly match between two masters of manipulation.

Both versions will feature identical bonus materials, such as three Featurettes and a selection of Deleted Scenes.