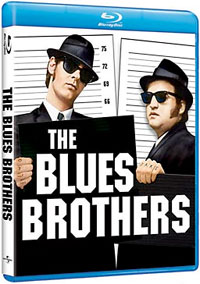 Universal Home Entertainment has also added a Blu-Ray version of the cult phenomenon The Blues Brothers to their July release schedule.

Comedy icons John Belushi (National Lampoon’s Animal House, “Saturday Night Live”) and Dan Aykroyd (Ghostbusters, “Saturday
Night Live”) star in the outrageously funny musical comedy The Blues Brothers. After the release of Jake Blues (Belushi) from prison, he and brother Elwood (Aykroyd) take their blues band back on the road in an attempt to raise money for the orphanage where they were raised. Havoc ensues as the brothers seek redemption on their “mission from God.” This soul-stirring comedy classic features unforgettable musical performances by blues legends Ray Charles, James Brown, Aretha Franklin and Cab Calloway.

Featuring a 1080p high definition transfer with a DTS 5.1 HD Master Audio track, the disc will include 2 versions of the film, offering up the Original Theatrical Cut of the movie, along with an Extended Cut that adds 15 minutes back into the film.

Also included is the Featurette ”Stories Behind The Making Of The Blues Brothers”, taking you behind the scenes with Director John Landis, Dan Aykroyd and the Blues Brothers band.

Transposing the Music offers up highlights of the many spin-offs, tributes and merchandising developments, as well as stage shows, impersonators and pop culture inspired by the film.
In Remembering John, friends, family and co-stars share their personal stories about the late great comedian.

The disc will be rounded out by the movie’s Theatrical Trailer and Universal’s BD Live featues.