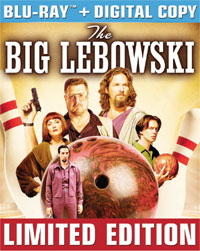 Universal Home Entertainment has added The Big Lebowski: Limited Edition to their line-up, bringing the movie to Blu-Ray Disc in August for the first time.

From the Academy Award®-winning Coen brothers, “The Big Lebowski” is a hilariously quirky comedy about bowling, a severed toe, White Russians and a guy named…The Dude. Jeff “The Dude” Lebowski doesn’t want any drama in his life…heck, he can’t even be bothered with a job. But, he must embark on a quest with his bowling buddies after his rug is destroyed in a twisted case of mistaken identity. Starring Jeff Bridges, John Goodman, Julianne Moore, Steve Buscemi, Philip Seymour Hoffman and John Turturro, experience the cultural phenomenon of The Dude in the “#1 cult film of all time!” (The Boston Globe)

The release features an 1080p high definition transfer of the movie with DTS 5.1 HD Master Audio. Jam-packed with bonus materials you will also find a series of Featurettes on the disc, such as ”Worthy Adversaries: What’s My Line Trivia,” “The Dude’s Life,” “The Dude Abides: The Big Lebowski Ten Years Later,” “Making of The Big Lebowski,” “The Lebowski Fest: An Achiever’s Story” and ”Flying Carpets and Bowling Pin Dreams: The Dream Sequences of The Dude”.

In addition you will find an Introduction, an Interactive Map and a Jeff Bridges Photo Book on the release, as well as various U-Control features that give you additional access to content through picture-in-picture video commentaries, such as a Scene Companion, Mark It, Dude and The Music of The Big Lebowski.

The release is rounded out by a Digital Copy of the film.