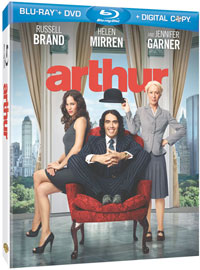 Warner Home Video has added the remake of Arthur, starring Russell Brand, for release on DVD and Blu-Ray Disc in July.

Russell Brand reinvents the role of lovable billionaire Arthur Bach, an irresponsible charmer who has always relied on two things to get by: his limitless fortune and lifelong nanny Hobson (Academy Award® winner* Helen Mirren) to keep him out of trouble. Now he faces his biggest challenge: choosing between an arranged marriage to ambitious corporate exec Susan (Jennifer garner) that will ensure his lavish lifestyle, or an uncertain future with the one thing money can’t buy – Naomi (Greta Gerwig), his true love. With Naomi’s inspiration and some unconventional help from Hobson, Arthur will take the most expensive risk of his life and learn what it means to be a man in this re-imagining of the beloved Oscar-winning romantic comedy Arthur.

The DVD version will feature the movie, accompanied by a selection of Deleted Scenes.

On Blu-Ray Disc, you will get a high definition transfer of the film, that will also include a Gag Reel and Deleted Scenes along with Arthur Unsupervised! in which Russell Brand and director Jason Winer expose all the fun footage, outrageous photos and Ad-libs too wild for theaters.