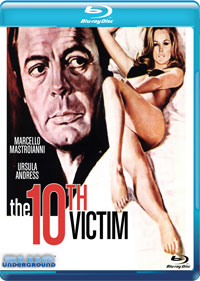 Following the DVD version they released a little while ago, Blue Underground has now also added a Blu-Ray version of the 60s cult classic, The 10th Victim to their line-up, scheduling the science fiction satire for release in August.

It is the 21st Century, and society’s lust for violence is satisfied by “The Big Hunt,” an international game of legalized murder. But when the sport’s two top assassins (Marcello Mastroianni and Ursula Andress) are pitted against each other, they find that love is the most dangerous game of all. As the world watches, the hunt is on. Who will become The 10th Victim?

“The 10th Victim” is the international cult classic whose wild action and sexy style has influenced a generation of movies, from “The Running Man” to the “Austin Powers” series.

The release will include the 2006 Full-length Documentary ”Marcello: A Sweet Life” as well as the movie’s Theatrical Trailer.

Prepare yourself for this outrageous science fiction satire when it comes to Blu-Ray on August
30, finally, for $29.98.