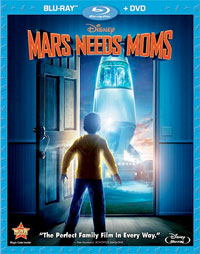 Take out the trash, eat your broccoli — who needs moms anyway? Nine-year-old Milo (Seth Green) finds out how much he needs his mom (Joan Cusack) when she’s nabbed by Martians who plan to steal her mom-ness for their own young. In a race against time and oxygen, his quest to save her knows no bounds. And with some unexpected help, Milo just might find his way back to her — in more ways than one.

The release will arrive on DVD, featuring the movie along with the Featurette “Fun With Seth”, in which the cast and crew discuss how they had a galaxy of fun making Mars Needs Moms, thanks to the on-set antics of Seth Green and Dan Fogler. Watch them do the ROM dance see them compete to see who can do their verbal ROM the fastest, and much more.

Also included is Martian 101, checking to see if you speak Martian? Go behind the scenes and see how the producer and cast came up with their own unique Martian language. Then learn how to speak it yourself with lessons from a leading Martian language expert.

On Blu-Ray Disc, the film will arrive in 1080p high definition with DTS 5.1 HD Master Audio. It will include the extras from the DVD but will also include an Extended Opening and the Life On Mars: The Full Motion-Capture Experience featurette which allows you to go way behind the scenes to the ‘space’ where the actors’ performances are captured. This feature-length, picture-in-picture viewing mode also lets you listen to director Simon Wells and actors Seth Green and Dan Fogler give a fun and insightful look into creating the movie.

On the Blu-Ray 3D version you will find everything from the Blu-Ray release, as well as an exclusive 3D bonus called
Mom-Napping. There’s more than meets the eye during the Martian abduction of Milo’s Mom. This alternate scene — completely finished in 3D — tells all.