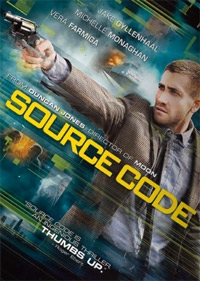 When soldier Captain Colter Stevens (Jake Gyllenhaal) wakes up in the body of an unknown man, he discovers he’s part of an experimental government program called the “Source Code” that enables him to cross over into another man’s identity in the last eight minutes of his life. Armed with the task of identifying the bomber of a Chicago commuter train, Colter must re-live the incident over and over again, gathering clues until he can solve the mystery and prevent an even deadlier second terrorist attack.

The DVD version will feature an anamorphic widescreen transfer of the action-packed movie, complete with Dolby Digital 5.1 audio. As extras, the release will include a Commentary Track by Jake Gyllenhaal, director Duncan Jones & writer Ben Ripley, as well as a series of Cast Interviews. Further you will get to find a few Science Focal Points and a Trivia Track on the disc.

The Blu-Ray version offers up a 1080p high definition presentation of the film, with DTS 5.1 HD Master Audio sound. The release will include all the bonus materials from the DVD but will wrap them in a video commentary format that provides the information on a scene specific basis.