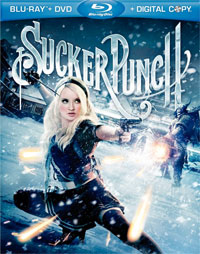 Born from the creative vision of filmmaker Zack Snyder (Watchmen, 300), this epic action fantasy launches from the vivid imagination of a young girl whose dream world provides the ultimate escape from her darker reality. Locked away against her will, Babydoll (Emily Browning) has not lost her will to survive. Determined to fight for her freedom, she urges four fellow captives – outspoken Rocket (Jena Malone), street-smart Blondie (Vanessa Hudgens), fiercely loyal Amber (Jamie Chung) and reluctant Sweet Pea (Abbie Cornish) – to band together and try to escape their terrible fate at the hands of their captors Blue (Oscar Isaac), Madam Gorki (Carla Gugino) and the High Roller (Jon Hamm).

The DVD version will feature an anamorphic widescreen transfer and Dolby Digital 5.1 audio. The only extra on the release will be Animated Shorts: Sucker Punch Prequel
Stories.

On Blu-Ray Disc, the film will be released as a Blu-Ray/DVD combo, presenting the film in 1080p high definition with DTS 5.1 HD Master Audio. It will include an R-rated version of the film that adds 18-minutes of additional footage back into the movie.

Also included on this version is a picture-in-picture Video Commentary with Zack Snyder.