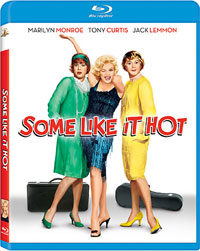 MGM Home Entertainment and 20th Century Fox Home Entertainment have announced a number of titles for release on Blu-Ray Disc at very short notice, making the film available next week already. One of those films is Billy Wilder’s comedy Some Like It Hot.

When Chicago musicians Joe (Tony Curtis) and Jerry (Jack Lemmon) accidentally witness a gangland shooting, they quickly board a southbound train to Florida, disguised as Josephine and Daphne, the two newest – and homeliest – members of an all-girl jazz band. Their cover is perfect… until a lovelorn singer (Marilyn Monroe) falls for “Josephine,” an ancient playboy (Joe E. Brown) falls for “Daphne,” and a mob boss (George Raft) refuses to fall for their hoax!

No bonus materials will be included in the release, it seems — at least none have been announced.