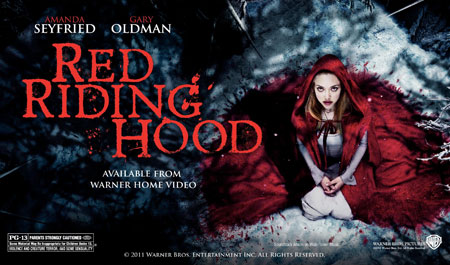 Now, here’s a film that got completely lost in the shuffle of this year’s movie fare. Warner Home Video has just announced Red Riding Hood for release on DVD and Blu-Ray Disc in June.

Set in a medieval village that is haunted by a werewolf, a young girl falls for an orphaned woodcutter, much to her family’s displeasure.

The movie will arrive as a DVD version as well as a Blu-Ray/DVD Combo, featuring and Extended Cut of the film with an Alternate Ending.

Then there is also “Red Riding Hood in 73 seconds” and “The Wolf Goes to a Hamlet Audition” Easter Egg as well as a Gag Reel and Deleted Scenes.