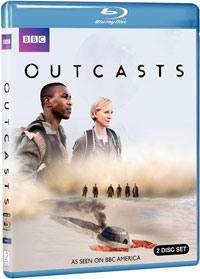 Warner Home Video has added the BBC television series Outcasts: Season One to their line-up, bringing the show to DVD and Blu-Ray Disc in August.

From the makers of award-winning and international hit series Life on Mars, MI-5, and Hustle, comes the new high concept drama Outcasts. When Earth becomes uninhabitable, a surviving group of pioneers decides to leave for the planet Carpathia to rebuild their lives, and hopefully the human race. The series takes viewers into a the new frontier as it explores survival, sex, politics and the drive for power in a new post-Earth era. And as the group continue to work and live together, they come to realize that this brave new world harbors a lurking mystery that threatens to topple the fragile peace they built. Created by Ben Richards (MI-5), the series stars Eric Mabius (Ugly Betty, The L Word), Liam Cunningham (Clash Of The Titans) and Hermione Norris (MI-5, Wire In The Blood).