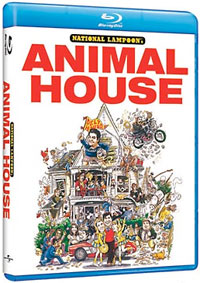 Universal Home Entertainment has added a Blu-Ray version of National Lampoon’s Animal House to their release line-up, scheduling the films for release in July.

Where are they now? is a mockumentary included on the release, featuring the original cast.

Scene It? Animal House is a potpourri of all your favorite moments from your favorite fraternity through real movie clips, trivia questions and an array of on-screen puzzlers with these two games.

“National Lampoon’s Animal House” spins out of control in your Blu-Ray player on July 26 for $26.98.