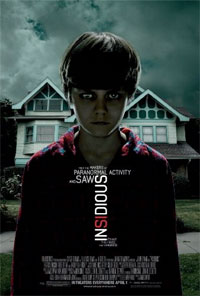 Insidious, one of the most acclaimed horror films of recent months has received a release date by Sony Pictures Home Entertainment and will make it to DVD and Blu-Ray Disc in July.

“Insidious”is the terrifying story of a family who shortly after moving discover that dark spirits have possessed their home and that their son has inexplicably fallen into a coma. Trying to escape the haunting and save their son, they move again only to realize that it was not their house that was haunted.

The DVD version will feature an anamorphic widescreen presentation of the movie with Dolby Digital 5.1 audio. As extras you will find the Featurette ” On Set With Insidious” on the disc, as well as Horror 101: The Exclusive Seminar and Insidious Entities.