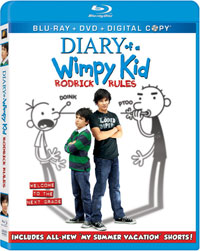 20th Century Fox Home Entertainment has just added Diary Of A Wimpy Kid: Rodrick Rules to their line-up, bringing this funny movie to DVD and Blu-Ray Disc in June.

Just back from summer vacation, Greg Heffley (Zachary Gordon, National Treasure: Book of Secrets) and his friend Rowley (Robert Capron, The Sorcerer’s Apprentice) enter the next grade as undersized weaklings in their school. A bully favorite, Greg tries not to get noticed by anyone except the pretty new girl, Holly Hills (Peyton List, 27 Dresses). And at home, Greg is still at war with his older brother, Rodrick (Devon Bostick, “Degrassi”), until their mom Susan (Rachael Harris, The Hangover) instigates a ‘Mom Bucks’ program so Greg and Rodrick can earn play money by doing chores and—gasp!—being nice to each other. Calamity ensues when their parents return from vacation and dad Frank (Steve Zahn, A Perfect Getaway) finds evidence that Rodrick secretly threw a houseparty with his band, Löded Diper. As they struggle with school and compete for ‘Mom Bucks,’ the brothers discover that avoiding trouble is easier if they unite—and their once-twisted partnership grows into a hilariously playful and sometimes mischievous friendship.

The DVD version will feature a Commentary Track as well as Two “My Summer Vacation” Shorts and the movie’s Theatrical Trailer.

There will also be a 2-disc DVD version, featuring the same features as the single-disc release, but adding to it a Gag Reel, Deleted Scenes and even more “My Summer Vacation” Shorts.

The Blu-Ray version arrives on three discs, featuring a high definition version of the film as well as the DVD version and a Digital Copy.

It will contain all the bonus materials form the DVD versions and will spice it up with an Alternate Ending, more Deleted Scenes and yet another “My Summer Vacation” Short.