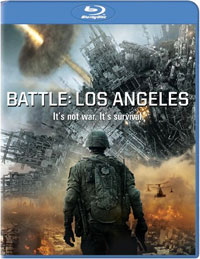 Witness the end of civilization unfold as hostile alien invaders attack the planet. As people everywhere watch the world’s great cities fall, Los Angeles becomes the last stand for mankind in a battle no one expected. Now it’s up to a Marine staff sergeant (Aaron Eckhart) and his platoon to draw a line in the sand as they take on an enemy unlike any they’ve ever encountered in this epic sci-fi action film.

The DVD version with an anamorphic widescreen transfer and Dolby Digital 5.1 audio will also include a series of Featurettes on subjects such as ”Behind The Battle, ” “Building the Aliens,” “Acting with Aliens,” “Shooting the Aliens,” “Preparing for Battle” and ”Creating L.A. in LA”.

The Blu-Ray version features a 1080p high definition transfer with DTS 5.1 HD Master Audio track and will contain all of the DVD features. In addition it will come with even more Featurettes, covering ”Directing the Battle,” “Boot Camp,” “The Freeway Battle,” “Command Control,” “Staff Sergeant Nantz,” “Marine Behind The Scenes,” “Aliens Ambush The Marines,” “Battling Unknown Forces,” “Technical Sargeant Santos,” “Alien Autopsy,” “Gas Station Explosion” as well as ”Visual FX on the Freeway,” “Do You Believe in Aliens?” and ”Alien Command & Control”. The release will also include PS3 Game Demos.