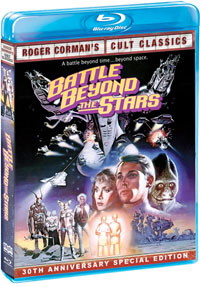 Shout! Factory has just added Rober Corman’s Battle Beyond the Stars: 30th Anniversary Edition to their schedule, bringing the cult classic to DVD and Blu-Ray Disc in July.

What’s a small, peace loving planet to do when they’re threatened with destruction by a group of malevolent mutants headed up by the most despicable villain? Why they enlist a sweet young boy to travel the galaxy in search of mercenaries to fend off the tyrant.

When the evil Sador the Conqueror (John Saxon) and his hideous Malmori army threaten the peaceful planet of Akir, the inhabitants, known as the Akira (in reference to Seven Samurai director Akira Kurosawa) sends young Shad (Richard Thomas of The Waltons) on an intergalactic journey to hire mercenaries to defend the planet. Piloting a sarcastic pre-LEXX talking female spaceship (with breasts!), Shad assembles a fleet of seven spaceships to fend off the bad guys.

There’s love interest Nanelia (Darlanne Fluegel), whose spaceship houses a sophisticated computer to help the cause; a scotch-drinking space cowboy from Earth (George Peppard of The A-Team); Gelt, an outlaw with a bounty on his head, played by Robert Vaughn in a role similar to the character Lee he played in The Magnificent Seven; the reptilian Cayman (Morgan Woodward), who has his own score to settle with Sador; Saint-Exmin of the Valkyrie (the voluptuous Sybil Danning), whose motto, “Live fast, fight well and have a beautiful ending” carries her into action; five clones with a collective consciousness known as the Nestor; and a pair of aliens who communicate by emanating heat from their bodies. The “magnificent seven” mercenary ships — headed up by Shad and Nell — travel back to Akir for the final conflict.

Both version will feature a brand new transfer, along with high end audio in DTS 5.1 HD Master Audio and Dolby Digital 5.1, respectively.

As extras you will find Commentary by writer John Sayles and Roger Corman a Commentary Track by production manager Gale Anne Hurd on the disc, as well as a New Interview with actor Richard Thomas. The Featurette ”Space Opera on a Shoestring” is a comprehensive look at the technical challenges and postproduction of the film with Aaron Lipstadt, Alec Gillis, Alex Hajdu, Allan Holzman, R.J. Kizer, Robert & Dennis Skotak, Thom Shouse and Tony Randel. The release will be rounded out by the movie’s Trailer along with TV and Radio Spots.