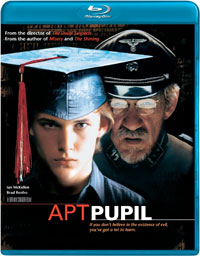 Ian McKellen and Brad Rentro star in a dark drama about a sixteen-year-old honor student who recognizes an old man living in his hometown as a hunted Nazi. Compelled to reveal the secrets of his death camp pat to earn the boy’s silence, the German fugitive derives a sinister scheme to implicate the teenager in a dangerous psychological game.

The release will feature a 1080p high definition transfer with a DTS 5.1 HD MAster Audio track. No extras will be included.