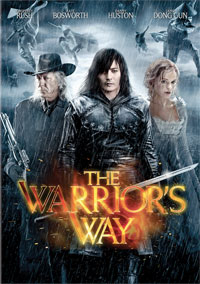 20th Century Fox Home Entertainment has added the martial arts picture The Warrior’s Way to their release line-up, bringing the film to DVD and Blu-Ray Disc in late June.

Academy Award Winner Geoffrey Rush, Kate Bosworth, Danny Huston, and International sensation Jang Dong Gun star in this boldly original film that blends intense martial arts action with a dazzling visual style. After a lifetime of training in swordsmanship and hand-to-hand combat, the world’s most dangerous fighter (Jang Dong Gun) flees his homeland to start a new life in the American West. But soon the hunter becomes the hunted, and now the legendary warrior must wage a fierce, all-out battle against a renegade gang of outlaws and a pack of murderous assassins from his own past.

The DVD version features an anamorphic widescreen presentation with Dolby Digital 5.1 audio. As extras, you will find Deleted Scenes and a Behind-The-Scenes Montage on the disc.

The Blu-Ray version arrives with a 1080p high definition transfer and DTS 5.1 HD Master Audio track. It will feature the same bonus materials as the DVD version.