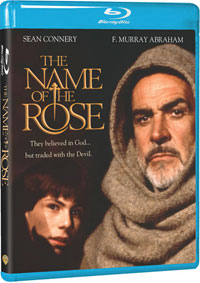 Warner Home Video has added The Name Of The Rose for release on Blu-Ray Disc in August.

They Believed In God But Traded With The Devil.

It’s the work of the Devil. That’s what some say when a bizarre series of deaths strikes a 14th-century monastery. Others find links between the deaths and the book of Revelation. But Brother William of Baskerville thinks otherwise. He intends to find a murderer by using fact and reason – the tools of heresy.

Best Actor British Academy Award winner Sean Connery is wily William in this compelling adaptation of Umberto Eco’s bestseller. Christian Slater plays Adso, aide to the sleuthing cleric and a youth on the verge of sexual and intellectual awakening. F. Murray Abraham is arrogance incarnate as the Inquisitor. Director Jean-Jacques Annaud filmed this moody mystery at an actual 12th-century monastery where hooded faces loom like gargoyles.