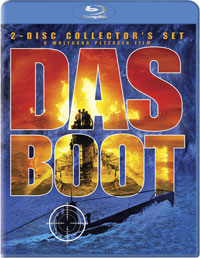 In the midst of World War II, as the tide turns against the Axis, a German U-boat crew is sent out to patrol the Atlantic and fire at Allied ships bringing supplies to England. The submarine also carries a press correspondent, there to report from the front lines of nautical warfare. Meanwhile, the crew’s captain (Jürgen Prochnow) is becoming disillusioned with the Nazi regime and with war in general. What starts out as a routine mission is soon livened up beyond the crew’s expectations when their boat’s surprise attack on a convoy is thwarted by a fast-moving destroyer. Battered by depth charges, the crew must pull together to survive the attacks of their unseen enemy.

Arriving on two discs, the release will feature both the theatrical version of the movie and the Director’s Cut in 1080p high definition with DTS 5.1 HD Master Audio. A Commentary Track by director Wolgang Petersen will accompany the film.

The release will also contain a number of bonus materials, such as the Documentary ”Wolfgang Petersen: Back To The Boat”. Also included are a number of Featureyyes, such as ”The Perfect Boat,” “Inside the Boat,” “The Director’s Cut,” “Captain’s Tour” and others, as well as a look Behind-the-scenes and The Battle of the Atlantic