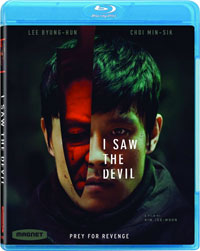 Magnolia Home Entertainmnet has added DVD and Blu-Ray versions of the Korean horror shocker I Saw The Devil to their release line-up in May.

“I Saw The Devil” is a shockingly violent and stunningly accomplished tale of murder and revenge from Korean genre master Kim Jee-woon (The Good, The Bad, The Weird and A Tale of Two Sisters). Oldboy’s Choi Min-sik plays Kyung-chul, a dangerous psychopath who kills for pleasure. The embodiment of pure evil, he has committed horrifying and senselessly cruel serial murders on defenseless victims, successfully eluding capture by the police.

On a freezing, snowy night, his latest victim is the beautiful Ju-yeon, daughter of a retired police chief and pregnant fiancée of elite special agent Dae-hoon (The Good, The Bad, The Weird’s LEE Byung-hyun). Obsessed with revenge, Dae-hoon decides to track down the murderer, even if doing so means becoming a monster himself. And when he finds Kyung-chul, turning him in to the authorities is the last thing on his mind.

The lines between good and evil fall away in this diabolically twisted game of cat and mouse. Pushing the concept of revenge to its most extreme limits, Kim Jee-woon brilliantly transcends the police procedural and serial killer genres in surprising and thrilling new ways.

No bonus feature have been announced for the title at this point.