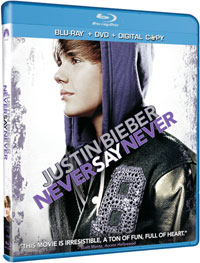 Justin Bieber’s odds were a million to one, until millions of fans found him online. Now his world is yours with Never Say Never, the “riveting and inspiring” story of his journey from average teen to the youngest performer to sell out the most famous stage in New York City.

THe film will arrive as a DVD in widescreen with Dolby Digital 5.1 audio track. As extras the disc will include Concert Dance Off, Favorite Girl, R.I.P Hair Flip and Giving Back.