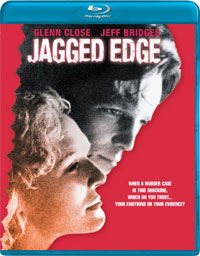 Image Entertainment has just added some smaller movies to their release line-up, making movies like Lockdown, Money Train and Jagged Edge available on Blu-Ray Disc for the first time in May.

In Lockdown Avery had it all: his beautiful girlfriend Krista, a young son and a full scholarship ahead of him. But in the blink of an eye, it was all taken away. What started as a night out with his buddies ended with the shooting of a cop and Avery behind bars. He’s innocent, but that doesn’t matter in a place that has its own set of rules. As Krista works to prove his innocence, Avery struggles to survive the day-to-day hardships of prison life.

Wesley and Woody are back in Money Train! And this time, nothing can stop their adrenaline pumping action adventure. John (Wesley Snipes) and Charlie (Woody Harrelson) are partners, best friends and foster brothers. Both are transit cops who work undercover on the New York subway. Both are quick-witted and quick-fisted. And both are in love with the same woman. But their sibling rivalry goes over the top when Charlie decides to rob the “money train”- the heavily guarded revenue train that collects millions of dollars from the subway booths. Now it’s up to John to stop his bad-boy brother… or join him for one final, phenomenal trip through the tunnel of fun!

A grisly homicide…a sensational trial…a forbidden affair. It’s Jagged Edge, a razor-sharp suspense thriller about crime, punishment and passion. Jeff Bridges is the prime suspect and Glen Close plays the attorney who falls in love with him. When a San Francisco socialite is viciously murdered, her publisher-husband, Jack Forrester (Jeff Bridges), is accused of committing the crime. Teddy Barnes (Glen Close) decides to defend the charming, manipulative Jack, only to disregard legal ethics by having an affair with him. With the help of private eye Sam Ranson (Robert Loggia), she takes on a ruthless D.A. (Peter Coyote) who’s using the case as a political steppingstone. However, a startling revelation puts Teddy in jeopardy of becoming the next victim of the Jagged Edge.

All titles are scheduled for release on May 17 for $17.97 without any extras.