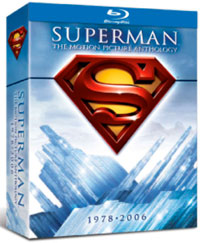 Superman, the cultural icon and quintessential superhero, is back in a big way. In a powerhouse year marked by the theatrical releases of several major superhero films including Warner Bros.’ “Green Lantern,” his arrival couldn’t be more perfectly timed.

Warner Home Video is celebrating the year of the superhero with the June 7 release of Superman: The Motion Picture Anthology (1978-2006) on Blu-ray Disc.

For the first time, fans will be able to own one super-entertaining Blu-ray collection with all four original theatrical Superman films starring Christopher Reeve (available for the first time in high def), Superman Returns, and the two alternate versions of Superman I and Superman II.

The eight-disc collection will be available for $129.95.