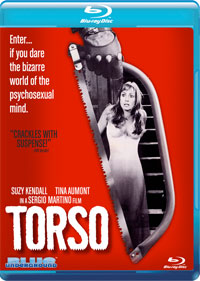 Blue Underground has just added the Italian horror thriller Torso to their line-up, bringing the film to DVD and Blu-Ray Disc in July.

Directed by Sergio Martino and starring Suzy Kendall and Tina Aumont, this Euro Horror chiller was originally released in America with much of its controversial violence removed by censors. Now freshly transferred in thrilling High Definition from the original negative, “Torso” is presented in both its Uncensored English Version and Full-Length Italian Director’s Cut for the first time ever!

The release will also include Murders in Perugia, an Interview with Co-Writer/Director Sergio Martino. Also included are the U.S. Opening Credits and the U.S. Trailer alongside with the movie’s International Trailer, TV Spots and Radio Spot. A Poster & Still Gallery will round out the disc.