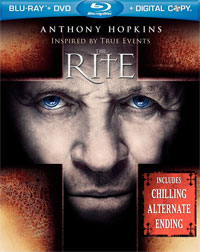 Warner Home Video has added The Rite to their line-up, scheduling DVD and Blu-Ray Disc versions of the film for release in May.

Inspired by true events, this supernatural thriller follows a seminary student (Colin O’Donoghue) sent to study exorcism at the Vatican in spite of his own doubts about the controversial practice and even his own faith. Only when sent to apprentice with legendary Father Lucas (Anthony Hopkins), who has performed thousands of exorcisms, does his armor of skepticism begin to fall. Drawn into a troubling case that transcends even Father Lucas’s skill, the young seminarian glimpses a phenomenon science can’t explain or control – and an evil so violent and terrifying that it forces him to question everything he believes.

The DVD version will feature an anamorphic widescreen presentation of the movie with Dolby Digital 5.1 audio. As a buns feature, the release will also contain Deleted Scenes.

The Blu-Ray version arrives as a Blu-Ray/DVD/Digital Copy combo and features a 1080p high definition transfer and a DTS 5.1 HD Master Audio track. As extras, the release will include Deleted SCenes, an Alternate Ending of the movie, as well as the Featurette ”Soldier of God”.