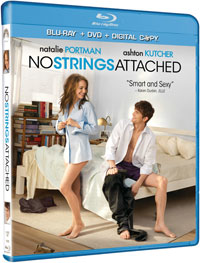 Paramount Home Entertainment has added the comedy No Strings Attached to their roster, bringing the film to DVD and Blu-Ray Disc in May.

Academy Award Winner Natalie Portman (Black Swan) and Ashton Kutcher (What Happens in Vegas…) star in the hilarious hit comedy that takes a modern look at what happens when friends-in-need do the deed. Emma is a busy doctor who sets up a seemingly perfect arrangement when she offers her best friend Adam a relationship with one rule: No Strings Attached. But when a fling becomes a thing, can sex friends stay best friends?

The DVD version will contain a Commentary Track by Director Ivan Reitman, as well as the Featurettes ”Sex Friends: Getting Together” and ”Inside The Sassy Halls Of Secret High”. Also included are Deleted Scenes along with Alternate Storyline Scenes.

The Blu-Ray version contains the same bonus materials as the DVD version – though all of them presented in high definition and will further include the Featurette ”Modern Love: The Dos and Don’ts”.

“No Strings Attached” will be in stores on May 10.