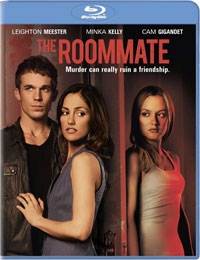 If you need a teenied-up version of “Single, White Female, ” Sony Pictures Home Entertainment is preparing The Roommate for you, bringing the thriller to DVD and Blu-Ray Disc in May.

She’s cute. She’s loyal. She’s psychotic. And, unfortunately for college freshman Sara (Minka Kelly) she’s “The roommate”. When Sara arrives at school, she finds new romance with Stephen (Cam Gigandet) and forms a fast friendship with her roommate Rebecca (Leighton Meester). What begins as camaraderie soon turns creepy, and Sara comes face-to-face with the terrifying realization that her new best friend is obsessive, unbalanced… and maybe even a killer!

The DVD version will include a Director’s Commentary and an Alternate Opening Sequence.

The Blu-Ray version contains the same Director’s Commentary and Alternate Opening Sequence and will in addition feature a movieIQ track. Further you will find the Featurettes ”Obsession: The Making of The Roommate,” “The Roommate: Next Generation of Stars” and ”Dressing Dangerously” on the disc.