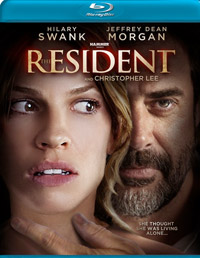 Image Home Entertainment has just scheduled the latest of the new Hammer Horror films for release on DVD and Blu-Ray, bringing The Resident to stores in late March.

Juliet (Academy Award-winner Hilary Swank), a beautiful doctor, has found the perfect New York apartment to start a new life after separating from her husband. It’s got spacious rooms, a spectacular view, and a handy, handsome landlord. But there are secrets behind every wall and terror in every room as Juliet gets the unnerving feeling that she is not alone. She is being watched. She is being stalked. And no one is safe when she discovers the relentless horror on her doorstep. But how do you stop an evil that you can’t see…until it’s too late? Jeffrey Dean Morgan and screen legend Christopher Lee costar in this pulse-pounding shocker from famed horror studio Hammer Films.

No details or specs have been announced for this release yet, but expect to see the discs on store shelves on March 29 for $27.97 on DVD and $29.97 on Blu-Ray Disc.