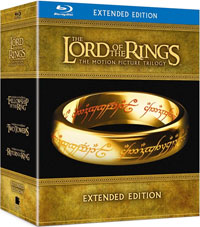 It has been available for pre-order on Amazon’s website for some time but without details and specs, the info was not yet ready to be announced. Now Warner Home Video and New Line Home Entertainment have finally pulled the veil off the upcoming release of the extended versions of The Lord of the Rings Trilogy on Blu-Ray Disc.

The Lord of the Rings Trilogy tells the story of Frodo Baggins (Elijah Wood), a hobbit who battles against the Dark Lord Sauron to save his world, Middle-earth, from the grip of evil. In the films, Frodo and his fellowship of friends and allies embark on a desperate journey to rid Middle-earth of the source of Sauron’s greatest strength, The One Ring — a ring that has the power to enslave the inhabitants of Middle-earth. The trilogy tells tales of extraordinary adventures across the treacherous landscape of Middle-earth and reveals how the power of friendship, love and courage can hold the forces of darkness at bay.

Arriving on 15 discs, the Blu-Ray version will feature all three feature films in their extended versions in glorious 1080p high definition, supplemented by 6.1 DTS HD Master Audio tracks. To ensure the best possible quality, each film will be spread across two Blu-Ray discs, allowing for the best possible sound and picture remastered from the original 2k digital files. In addition, each film will feature three Commentary Tracks, by the director and writers, the design team, and one by the post production team.

The set boasts more than 26 hours of additional content, highlighted by the rare behind-the-scenes documentaries created by Costa Botes, the filmmaker given unprecedented access to the set of each production by Peter Jackson.  Costa Botes was able to capture raw and riveting behind-the-scenes film footage.  His unique approach to storytelling – allowing the footage to speak for itself – results in an intimate and candid backstage pass to the challenges, preparations and camaraderie that went into shooting one of the greatest cinematic adventures of all time. The feature-length documentaries, with more than four and a half hours of footage, focus on a number of complexities and circumstances that tested the filmmakers, cast and crew during the shoot, as well as a look at some of the comical antics and personal moments on the set. The Costa Botes documentaries accompany acclaimed special features by Michael Pellerin from the original extended cut releases to make this the most comprehensive “The Lord of the Rings” compilation ever.

Countless Featurettes and Vignettes — too numerous to recount here — will be included also, along with Introductions, BD Live features, and a whole lot more.

“The Lord of the Rings Motion Picture Trilogy: Extended Edition” will arrive in stores on June 28 for $119.99. As of this writing, Amazon has the title on sale for only $83.99, so you may want to head over there really quickly and place your pre-order before the price goes up!