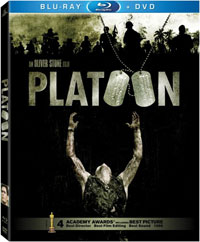 Still haven’t seen enough of Charlie Sheen? Well, MGM Home Entertainment tries to feed you some of his actual work when the studio will release Platoon on Blu-Ray Disc in May.

“Platoon” tells the extraordinary journey of Private Chris Taylor (Charlie Sheen), a young, naive American who arrives in Vietnam and quickly discovers he must battle the Viet Cong alongside the gnawing fear, physical exhaustion and intense anger growing within him. His two commanding officers (Oscar®-nominated Tom Berenger and Willem Dafoe) draw a fine line between the war they wage against the enemy and the one they fight with each other. Meanwhile, the conflict, chaos and hatred permeate Taylor, suffocating his realities and numbing his feelings to man’s highest value: life.

Arriving as a sepcial 25th Anniversary Blu-Ray and DVD Combo Pack, the release features a 1080p high definition transfer of the movie with a DTS 5.1 HD Master Audio track.

Among the extras you will find a Commentary Track by Director Oliver Stone, as well as another Audio Commentary with Military Advisor Dale Dye. Also look for Deleted & Extended Scenes on the release, alongside with the Documentaries ”One War, Many Stories” and ”Preparing for ‘Nam”. A round of Flashback to Platoon Featurettes are also included, covering ”Snapshot in Time: 1967-1968,” “Creating the ‘Nam” and ”Raw Wounds: The Legacy of Platoon”.

But there’s more still. The Vignettes ”Caputo & The 7th Fleet,” “Dye Training Method” and ”Gordon Gekko” will be included also, along with a series out Trailers and TV Spots.

“Platoon” will go into action on May 24.