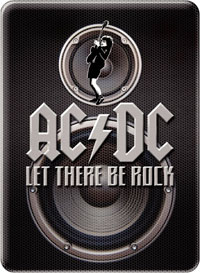 Fans of the Australian rockers AC/DC have been waiting for this moment for a long time, but finally, Warner Home Video will bring their 1979 concert film Let There Be Rock to DVD and Blu-Ray Disc in June.

The only movie powered by AC/DC. This legendary concert film, covering a 1979 Paris concert during the Australian heavy metal band’s “Highway To Hell” tour showcases the power and precision that the quintet bring to vicious rockers like “Whole Lotta Rosie” and “Let There Be Rock.” Pixieish lead guitarist Angus Young, attired in his trademark school-boy’s uniform, takes center stage with his energetic antics and frenetic solos, while the rest of the band crank out their minimalist boogie with quiet determination. Interview segments and humorous backstage footage show another side to the thuggish musicians, especially AC/DC’s flamboyant lead singer Bon Scott, who died two months after this filmed concert.

The DVD version of this incredibly energetic music film will be available in two formats. The first will be a single-disc DVD featuring only the movie. In addition, Warner will release a Limited Collector’s Edition of the movie, stuffed to the brim with bonus materials, such as Loud, Locked & Loaded: The Rites of Rock, a featurette in which seasoned rockers, actors and journalists recollect their rite of passage as early witnesses to the raw, bone rattling rock of AC/DC.

Also included is AC/DC: The Bedrock of Riff, a look at why no one has mastered the basic DNA of Riff Rock as successfully as AC/DC. Explore Angus and Malcolm Young’s telepathic groove and the four-on-the-floor swing of Mark Rudd.
Next up is Angus Young: A True Guitar Monster, showing Angus’ transformation from diminutive schoolboy to raging rock monster who electrifies the masses. Find out what makes this time bomb tick.

Another highlight of the release is Bon Scott: The Pirate of Rock ‘n’ Roll, portraying how Bon Scott, the ringleader of the AC/DC circus, balanced his screaming sexuality with a rakish charm. Get a glimpse into the life of a classic Rock “n” Roll pirate.

AC/DC: A Rock Solid Legacy is also included. From bar band to arena rock, AC/DC stuck to their guns and shot their way to the top. Fellow rockers and journalists chart AC/DC’s ascent into the Pantheon of Rock Gods in rock ‘n’ roll history.

Further you will find Song Specific Interviews on the disc, along with a 32-page custom mini book, a Custom Guitar Pick and 10 Postcards with images from the show.

On Blu-Ray, the film will be available as the Limited Collector’s Edition only, offering u pall the same bonus materials.