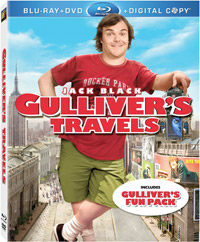 20th Century Fox Home Entertainment has added the Jack Black version of Gulliver’s Travels to their roster, scheduling the film for release in April on DVD and Blu-Ray Disc.

Jack Black (Kung Fu Panda, School Of Rock) is larger than life in this epic comedy-adventure based on the classic tale. When a shipwreck lands a lowly mailroom clerk named Gulliver (Black) on the fantastical island of Lilliput, he transforms into a giant – in size and ego! Gulliver’s tall tales and heroic deeds win the hearts of the tiny Lilliputians, but when he loses it all and puts his newfound friends in peril, Gulliver must find a way to undo the damage. Through it all, Gulliver may just learn that it’s how big you are on the inside that counts.

The 2-disc DVD version will feature the movie along with a number of bonus materials, such as a Gag Reel, 8 Deleted Scenes and series of Featurettes, like ”I Don’t Know…with Lemuel Gulliver,” “Little and Large,” and “Jack Black Thinks Big”. Also included is Gulliver’s Foosball Challenge and the movie’s Theatrical Trailer.

The Blu-Ray version arrives on 3 discs, featuring a 1080p high def version of the movie, complete with the Gag Reel and Deleted Scenes, as well the Featurettes from the DVD Version. Further, you will find additional Featurettes on the release, such as ”Down Time – Fun Foosball Gulliver Style” and ”War Song Dance”. The Fox Movie Channel Presents Featurettes ” In Character Jack Black and In Character Jason Segel” and ”In Character Jason Segel” are also included along with Life After Film School: Rob Letterman of Gulliver’s Travels and the BD Live Extras ”Jack & Jason’s Dance Class” and ”Little and Large” along wit hthe movie’s Theatrical Trailer.

Also included in this version is the full DVD Version and a Digital Copy of the movie.

In addition, a 3D Blu-Ray version will be released, which will add a fourth disc to the release, offering the 3D version of the movie in addition to all the other features of the regular Blu-Ray version.