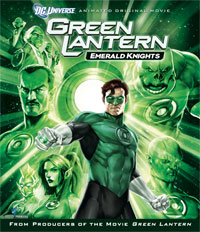 The origins of the ultimate intergalactic police force are revealed across six interlocking tales of the legendary Green Lantern Corps in the all-new Green Lantern: Emerald Knights, the next entry in the popular, ongoing series of DC Universe Animated Original Movies, scheduled to hit Blu-Ray Disc in June.

This Blu-Ray Combo Pack has over 2 1/2 hours of exciting content, including a Sneak Peak at Batman: Year One, the next DC Universe Animated Original Movie, as well as a Behind-the-Scenes Look at All-Star Superman.

Further, you will find the Featurette “Only the Bravest: Tales of The Green Lantern Corps” on the disc, showing how bravery is the unique, identifying characteristic of each Green Lantern. Yet what does it mean to be brave?  How has the world of Green Lantern and the Corps made bravery into something we can all relate to?  This story reveals and defines the bond that holds together the Green Lanterns’ affection for the ring, and the ring’s unwavering loyalty in return.

The Featurette “Why Green Lantern Matters: The Talent of Geoff Johns” is also included, explaining why Geoff Johns is a force to be reckoned with. He’s not only the Chief Creative Officer of DC Entertainment, he’s a New York Times bestselling writer with a fresh and vibrant storytelling perspective. Johns discusses his contemporary take on the Green Lantern character and why that character resonates in our culture.

From Comic Book to Screen: Abin Sur is a peek into Geoff John’s “Green Lantern Secret Origin” book which, for the first time, showed fans what really happened to Abin Sur before he crashed landed on Earth, and passed his ring to Hal Jordan.
Beautiful … But Deadly – From Comic Book to Screen: Laira Omoto lets you see how “Green Lantern: Emerald Knights” again creatively weaved a riveting comic book short story into the intricate plot of the film while introducing the honorable Green Lantern, Laira Omoto.  Known as one of the Green Lantern Corps’ fiercest warriors, this mini-featurette takes a deeper look into the history and origin of this humanoid marital artist and her family feud with the Golden Dragon!

The release will also include a DVD version of the movie, as well as a Digital Copy when it arrives on June
7 for $24.98.