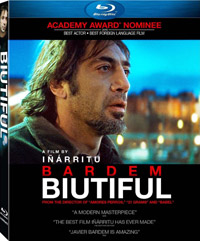 Lionsgate Home Entertainment has just added the Academy Award-nominated movie Biutiful for releaseon DVD and Blu-Ray Disc in late May.

Oscar-winning actor Javier Bardem masterfully takes on the role of Uxbal, a man in free fall, that the Los Angeles Times calls, “one of the year’s best performances.” Honored with multiple awards including Best Actor at the Cannes Film Festival and a Best Foreign Language Film Golden Globe® nomination, the drama based on a short story by director Alejandro González Iñárritu  (Babel, Amores Perros) has been hailed as “riveting” (New York Post).  The DVD and Blu-ray Disc include a making-of documentary that takes viewers behind the scenes of this powerful, arresting film.

Uxbal (Javier Bardem) is a man living on the wrong side of the law who struggles to provide for his children on the dangerous streets of Barcelona. As fate encircles him, Uxbal learns to accept the realities of life, whether bright, bad – or biutiful – in this unforgettable film.

Apart from the feature film, the DVD and Blu-Ray Disc will also include a Making-Of Documentary that takes viewers behind the scenes of the film.