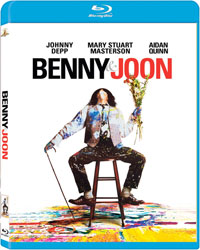 MGM Home Entertanment and 20th Century Fox Home Entertainment have added Benny & Joon to their release line-up, scheduling a Blu-Ray version of the film for April.

Joon (Masterson) is a little unbalanced. Sometimes, without warning, her sweet nature gives way to odd behavior – including a penchant for setting fires! She lives with her older brother Benny (Quinn), who has spent his life taking care of her since their parents died. One night, while playing a poker game with unusual stakes, Joon loses her hand…and wins Sam (Depp), a whimsical misfit who soon charms his way into Joon’s heart. Now if they can only find the perfect mate for her overprotective brother…

No bonus materials have been announced but expect to see the disc in stores on April 4 for $19.99.