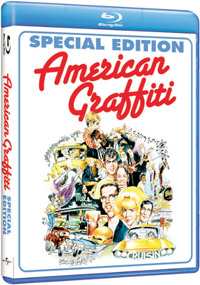 Universal Home Entertainment has just added American Graffiti to their line-up, bringing the beloved movie to DVD once again and to Blu-Ray Disc for the first time in May.

From director George Lucas (Star Wars) and producer Francis Ford Coppola (The Godfather), American Graffiti is a classic coming-of-age story set against the 1960s backdrop of hot rods, drive-ins and rock n’ roll. Starring Ron Howard, Richard Dreyfuss, Harrison Ford, Cindy Williams, Mackenzie Phillips and Suzanne Somers in their breakout roles, this nostalgic look back follows a group of teenagers as they cruise the streets on their last summer night before college. Nominated for five Academy Awards, including Best Picture and Best Director, “American Graffiti” features the howling sounds of Wolfman Jack and an unforgettable soundtrack with songs by Buddy Holly, Chuck Berry, The Beach Boys and Bill Haley & His Comets.

The new DVD version will feature the movie and supplement it with a Commentary Track by Director George Lucas, as well as The Making of American Graffiti and the movie’s Theatrical Trailer.

The Blu-Ray version will arrive in 1080p high definition with a DTS 2.0 HD Master Audio track. In addition, it will feature a Video Commentary with Director George Lucas as well as the interactive feature, The Music of American Graffiti. The Making of American Graffiti will also be included, along with Screen Tests and the movie’s Theatrical Trailer. BD-Live and Pocket BLU App will round out the release.