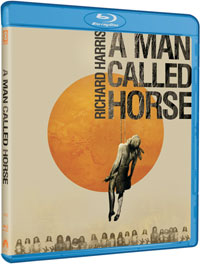 Paramount Home Entertainment has also added A Man Called Horse to their release line-up, bringing the film to high definition for the first time in May.

Richard Harris stars as Lord John Morgan in this carefully documented epic that realistically portrays the life of the American Sioux Indian Tribe in the early 19th century. When Morgan is captured by the Sioux, he is given to the chief’s mother (Dame Judith Anderson) as a servant. Gradually, he embraces the tribe’s way of life and falls in love with the chief’s sister. But before he can be accepted with honor as an equal member of the tribe, he must endure the Sun Vow — a savage ritual far beyond the realm of anything dreamed of in the civilized world.

The release will feature a 1080p high definition transfer, complemented by a 5.1 surround audio track – the exact specs have not been made available yet. Like the DVD version of the film, this release will not contain any bonus materials.