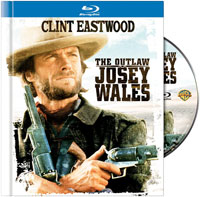 Warner Home Video has added the Clint Eastwood classic The Outlaw Josey Wales to their line-up, releasing the movie as a Blu-Ray Book in June.

As “The Outlaw Josey Wales,” four-time Academy Award winner Clint Eastwood is ideally cast as a hard-hitting, fast-drawing loner, recalling his “Man with No Name” from his European Westerns. But unlike that other mythic outlaw, Josey Wales has a name – and a heart.

After avenging his family’s brutal murder, Wales is on the lam, pursued by a pack of killers. He travels alone, but a ragtag group of outcasts (including Sondra Locke and Chief Dan George) is drawn to him – and Wales can’t leave his motley surrogate family unprotected. Eastwood’s skill before and behind the camera connected with audiences for its humor and tenderness as well as its hair-trigger action.

In addition, the disc will feature an Introduction by Clint Eastwood, and the Making-of Featurette ”Hell Hath No Fury” along with an Eastwood in Action Vintage Featurette and the movie’s Trailer.